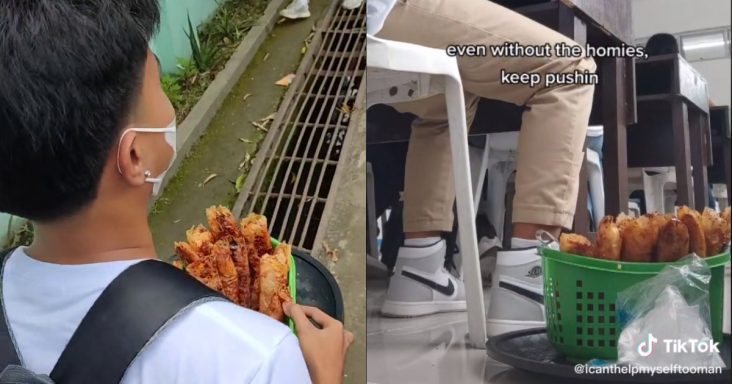 A 16-year-old student from Victoria, Laguna, sells turon at school to earn extra income and assist his mother, an OFW who works in Saudi Arabia.

A student in Grade 11 named Nico Vergara has been selling turon in his neighborhood. He eventually considered taking it to school, according to an episode of “Kapuso Mo, Jessica Soho.”

He gets his turon from his godmother and sells it to the instructors and students.

“I go inside their room and inquire if their want to buy. Since I didn’t know the teachers or the pupils, I initially felt embarrassed.”

“I occasionally make 160 pesos. I will give it to Ninang, and it’s up to her how much she will give me,” he said.

Aside from selling turon, Nico assists his father with his construction work when he has no school classes.

Nico does not neglect his studies and performs actively in his classes despite working to support his family.

Although Nico attends a private school, his teacher states that many students there do not come from rich families and depend on the Pantawid Pamilyang Pilipino Program (4Ps).

As for Nico’s family, his mother, Arlaine supports him and his siblings for the past six years by working as a domestic helper in Saudi Arabia.

Nico is quite aware of his mother’s absence. He misses her so much since he and his siblings do not get to have their mother by their sides on a daily basis, including birthdays, graduations, times when he is ill, and ordinary occurrences.

The Laguna provincial government provided Nico with a scholarship as a way of helping him and his family. While his father Nestor was offered with a regular work, a private organization provided some cash assistance and groceries. The KMJS team also provided some financial help.

Over 1 million people have liked and commented on a TikTok video of Nico selling turon at school that has recently gone viral. Many people praised and respected him for his determination.

[“I want to inspire other young people like me that lack of money is not an obstacle to go to school,” he said]

For anyone who wish to help Nico and his family, donations can be send to the following address:

Recommended: Working student buys a bicycle from his own hard-earned money