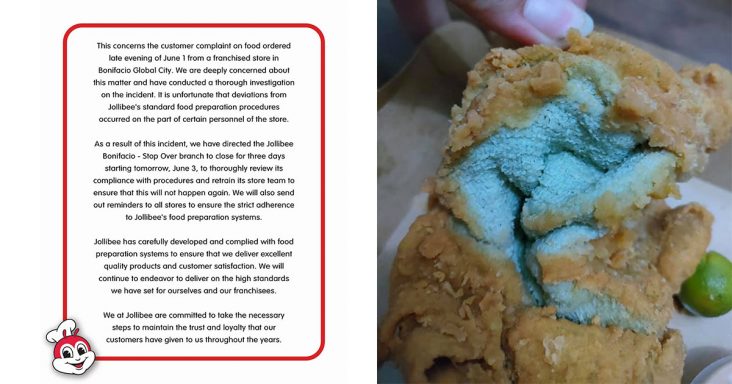 Jollibee announced that they will temporarily shut down the Bonifacio Global City Stop Over branch for three days after the viral ‘fried towel’ incident.

Posted on their Facebook Page, Jollibee released their official statement regarding the customer experience of Alique Perez, wherein she received a deep-fried towel inside a Palabok meal instead of a fried chicken. Her Facebook immediately went viral after it was posted on, Tuesday, June 1.

“This concerns the customer complaint on food ordered late evening of June 1 from a franchised store in Bonifacio Global City. We are deeply concerned about this matter and have conducted a thorough investigation on the incident. It is unfortunate that deviations from Jollibee’s standard food preparation procedures occurred on the part of certain personnel of the store.”

“As a result of this incident, we have directed the Jollibee – Stop Over branch to close for three days starting, June 3, to thoroughly review its compliance with procedures and retrain its store team to ensure that this will not happen again. We will also send out reminders to all stores to ensure that strict adherence to Jollibee’s food preparation systems.”