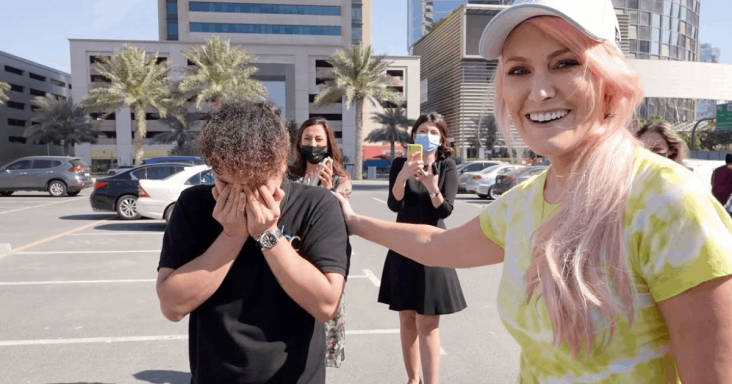 Supercar Blondie, Alex Hirschi, and her team give back to the community in Dubai by giving away three cars in partnership with Hyundai!

Luckily, Supercar Blondie has chosen one hard-working Filipino in Dubai to be a winner of one of the three Hyundai cars through her giveaway contest on Instagram.

A Pinoy office assistant in Dubai, Jared is nominated by her boss Abir.

“I’m here today Alex to tell you the story of someone I value so much. His name is Jeric. he’s not only one of my office assistants, but he’s also one of my main team members. He joined us three years back. He came from the Philippines, empty pockets with the help of his brother-in-law and his sister they helped him to secure a job here at one business center.”, Abir said in an interview.

“Jeric has some health issues. I’m not at liberty to discuss it today. If I had the help and the capabilities I’ll always choose Jeric.”, Abir added.

Jeric thought they go outside for a photoshoot as told by his boss. Afterward, when Alex appeared and asked him “how are you?”, he said he was “Star-struck”.

Finally, when Alex said to him turn around, a brand new Hyundai Elantra is waiting for him.

Watch the emotional surprise to Jeric by Supercar Blondie:

Jeric called her mom and shared the good news. Speaking in Tagalog, Jeric can’t hold back his tears as he said Supercar Blondie gave him a car.

In addition, Jeric said that the prize is for her mom. Her mother is alone in the Philippines after his father passed away. His mother is his inspiration for his hard work.

Moreover, Supercar Blondie gave away two more Hyundai cars to the other two winners of their contest.