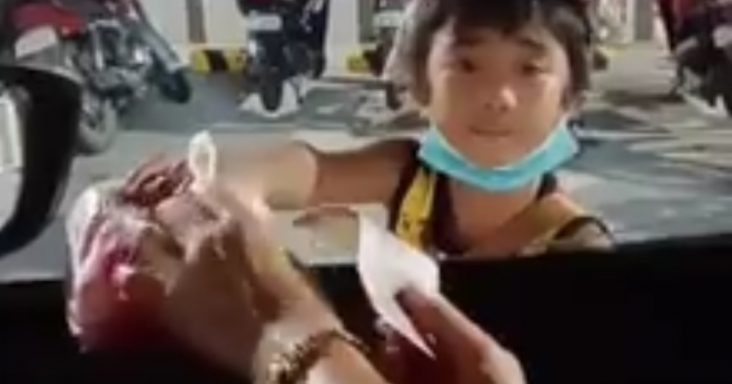 A video of a young fruit vendor selling apples at a fastfood restaurant’s drive-thru area went viral on Facebook.

Xof Naraplap shared a clip of the conversation with the boy offering him and his wife to buy some apples. Naraplap promised to give him food after ordering at the fastfood restaurant. The young vendor then asked them to buy some apples so he could come home early.

In the video, Xof’s wife said she doesn’t eat apples so the couple decided to give the 100 peso bill to the young vendor instead.

But the kid insisted not to accept the money without giving the fruits to the couple.

When Naraplap said to give the money to his siblings, the young seller answered, “Dapat po kung ano pong binili tanggapin na lang po kasi sayang ang pera”, that made the couple to get the fruits.

Naraplap reminded the boy that they’ll give him food after ordering at the drive-thru.

Many netizens admired the kid for his determination to earn money at a young age and skills in selling.

Also Read: Viral: An elderly candy vendor received a bike as a gift from shop owner

Moreover, Xof and his wife came back to the drive thru area where they met the young vendor. Some netizens wanted to lend some help for the kid. The couple bought all the fruits he was selling that night. They also gave him extra 1000 pesos so he can come home early. They found out that the kid’s name is Macoy Santos.

The viral video got more than 361 thousand views, 7.2 thousand positive reactions and more than 6.2 thousand shares, as of this writing.