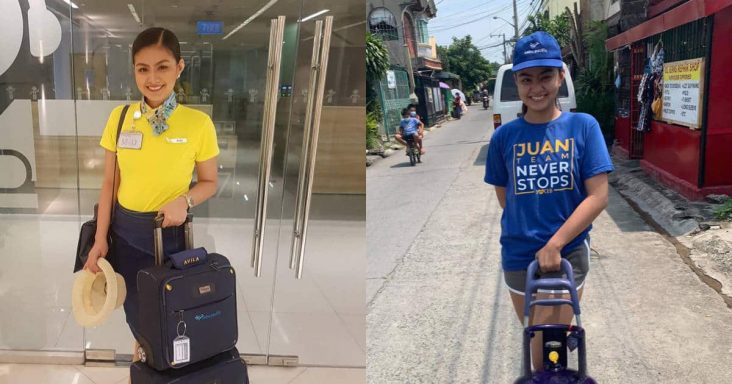 A former flight attendant who was retrenched amid the COVID-19 pandemic turns to sell liquified petroleum gas (LPG).

On Facebook, the former Cebu Pacific flight attendant, Maurice Maureen Avila wrote about the struggle to accept to herself after she lost her dream job. She also shared her realization that leads to her new business venture.

“Today, Oct. 16, is the effectivity date of the 2nd wave of retrenchment in Cebu Pacific. I am exactly one and a half months unemployed.”

In her post, Avila included the two photos of her wherein she described:

“1st photo. Taken during my FA days where life was so easy and totally different.”

“2nd photo. Present. What I do for a living now. The first business that I and my boyfriend ever tried.”

Furthermore, Avila said that it took so long for her to accept what happened and post on social media. Many asked her about it that she was shy to reply. She felt she failed in life.

The former flight attendant said she was devastated for 2 weeks that cause her to lost her appetite to eat and cried night and day.

Moreover, she encouraged those who also lost their job due to the pandemic to don’t lose hope. She realized in one and a half months, she said whatever we want in life, if that’s not in God’s plan, He will take away from you.

Avila said she looks forward to Grand Hiring for those who still want to be a flight attendant.

“There is always hope and always keep in mind that there is light at the end of the tunnel. We will paint the sky yellow, blue and red again! We will have our wings again!”

Lastly, Avila ended her post by thanking and bidding goodbye to her beloved airline.

Also Read: Viral: A nurse helps deliver the baby of a woman on a sidewalk