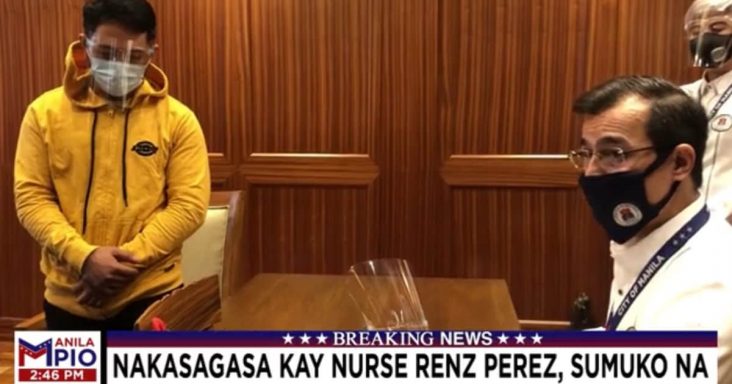 The driver of the vehicle who hit-and-run the killed nurse Renz Jayson Perez has surrendered to Manila Police. He sought an audience with Manila Mayor Isko Moreno, asked forgiveness for the incident. He said it was an accident and said he is ready to face charges.

The driver identified as Mohamad Ali Sulaiman, a relative of the owner of the black pick-up truck involved in the incident that killed the 23-year-old bicycle riding nurse.

The Manila Police District arrested Saudah Bacaye, the owner of the vehicle, August 27. According to her lawyer, Atty. William Delos Santos said his client had no idea who was driving her vehicle during the time of the tragedy.

Last August 23, Renz Jayson Perez was biking along Padre Burgos Avenue when he was hit by the vehicle before it sped off toward Delpan Bridge. Perez was rushed to Philippine General Hospital, but the medical frontliner pronounced dead on arrival.

Manila Mayor Isko Moreno Domagoso announced to the suspect to surrender after he found out the incident that killed Perez. He urged the Manila Police District to seek justice for the health worker.

Watch the video below where Sulaiman surrendered to the office of the Manila mayor.

Also Read: A 54-yr old doctor on bike going home, killed after hit by a truck