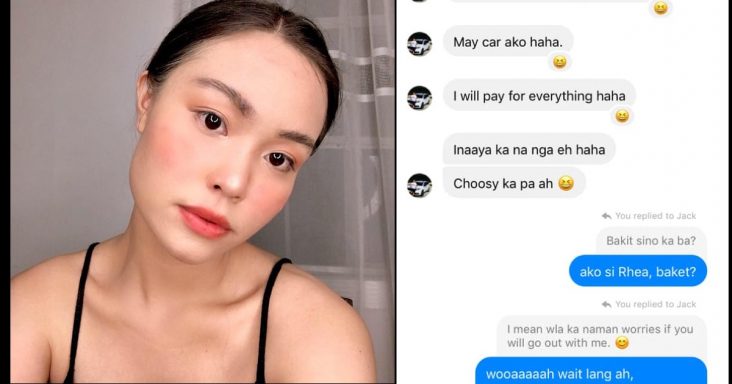 A female gamer’s Facebook post immediately went viral about a guy inviting her out for a date, Friday, August 28.

Rhea Retiza did not like the way being invited to a road trip by a guy named Jack. “Ayoko maging scandalous tonight but I couldn’t be more proper after reading this haha lol, sobrang prone ko naman sa mga kinulang sa yamang mga mayayabang na pangit,”, she started her post.

The Cainta-based gamer shared screenshots of their conversation on Messenger. At first, Rhea replied that she did not have time. Initially, when Jack wanted to call her, she was currently working. Rhea would have ignored the following messages. But she got irritated when she asked of “Sino ka ba?”. Then following it up that he has a car.

Rhea felt offended. She answered Jack, “you really think you can have me by flexing your money, your car, etc?”. When the guy continued to lure her, she told him to go to sleep. She ended the conversation with strong and clear disapproval, “I don’t want to go out with you, tapos ang usapan [end of conversation].”

On her Facebook post, she admitted she faced countless encounters with impolite invites and should be more vocal about it after with this named “Jack”. She disclosed that the post was not to please everyone.

Moreover, she cleared that she doesn’t have a problem with the car model itself. She was just irked by the guy’s question. She added that she has male friends who have better cars. She reminded everyone, “don’t bait females by wheels”.

The Facebook post of Rhea Retiza gained positive reactions from netizens, which means supporting her point. The post has reached more than 86 thousand reactions, shared more than 73 thousand with more than 7.4 thousand comments.

Also Read: Bela Padilla files a complaint vs. a man who insists to go inside her condo