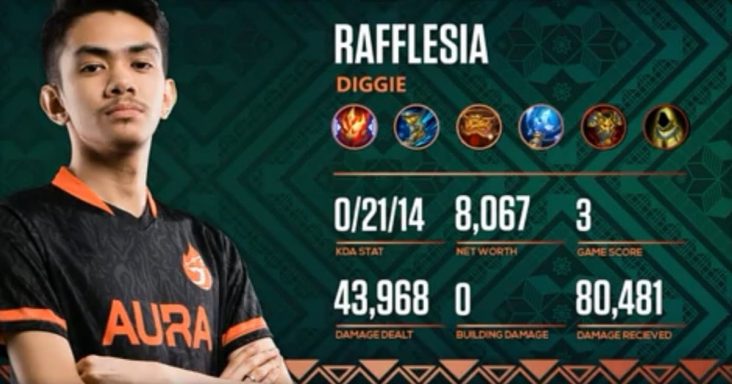 Aura PH shocked Execration by using the Diggie troll gameplay strategy in Game 1 of their Best of 3 series, Aug 22.

Aura PH’s team captain Rafflesia used Diggie, a support bird-like hero that turned into an egg form. Diggie is capable to stroll even when killed and resurrect anywhere in the map. Aura PH, formerly Sunsparks, took advantage of this skill of Diggie by attracting the focus of Execration to him. He also gave map vision for his allies at the same time.

The gameplay gave window for the other four Aura PH to focus on farming, push the lanes, and steal turrets.

Execration was late to realize that killing Diggie didn’t give them enough gold, and their map became smaller.

Surprisingly, Rafflesia was even named MVP of that game even with the worst number of deaths in 0-21-14 KDA.

Execration redeemed their lose on Game 2 but Aura PH closed the series to 2-1.

The reigning Mobile Legends: Bang Bang MPL-PH Champion impressed many netizens who watched the livestream. Some expressed their amusement that made Aura PH one of the top trending topics of the night on Twitter.

Some netizens mentioned Ch0ox, a popular ML Filipino livestreamer, used this Diggie troll strategy before. They wondered if Aura PH got inspired from him.