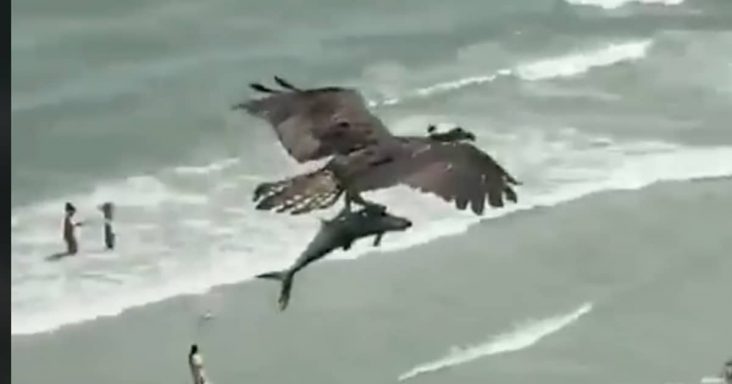 A rare footage of a large flying sea hawk known as osprey while holding through its claws a shark-like fish got viral on Twitter, July 2.

The 25-second clip tweeted by Rex Chapman has been viewed 23.6 million times, including 132 thousand retweets and comments. “ Just in case you haven’t seen a bird flying around with a shark that it just plucked out of the ocean…”, Chapman said in the caption, tagged Tracking Sharks.

The original uploader of the majestic video clip is Ashley White (@adubb1022) from Erwin, Tennessee. She filmed the unbelievable rare video of the osprey from her level 17 hotel balcony in Myrtle Beach, South Carolina, June 22.

Many netizens gave fair share of their jokes and speculation about the amazing action of the large flying bird and fish. Some remembered the resemblance to sci-fi disaster film “Sharkanado”.

“The Osprey is a unique among North American raptors for its diet of live fish and ability to dive into water to catch them, unmistakable when seen flying, It is the only species in its family, and it is found worldwide.”, one Twitter netizen said.

Some hilariously made the comparison of the terrific clip to popular Disney’s Jasmin and Alladin “I Can Show the World” movie scene.

“Hope he don’t drop that shark…people will freak the duck out while they’re laying on the beach! Maybe that’s a good thing tho…sign that they should all go the duck home and be safe.”, one concerned Twitter user said.

More importantly, the surprising plot twist has been revealed the truth about the viral video clip. Massachusetts Shark Researcher John Chisholm confirmed the flying bird is an osprey and its meal was not a shark, but instead a Spanish Mackerel, via Tracking Sharks.

Also Read: One of largest shark species in the world found in Agusan del Norte