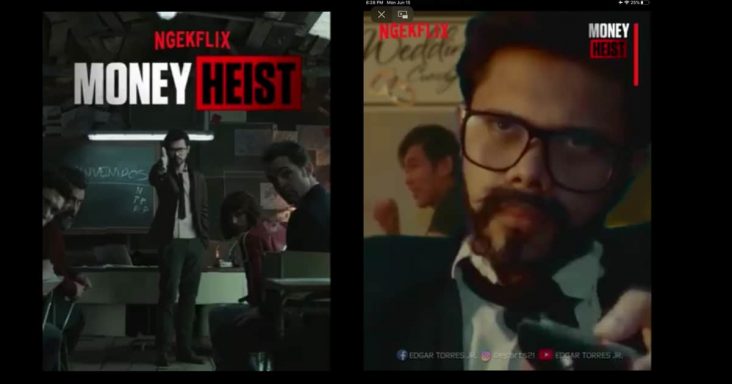 Once again, a familiar creative netizen caught the attention of the internet. This time, the popular Netflix’s Money Heist fans will like his latest work!

Edgar Torres Jr., a talented visual artist from Laguna, tried to imitate the Professor of the action-packed Spanish online series. The Professor is portrayed by Álvaro Morte. He is one of the main and important characters of the series. Torres did his best to copy the appearance and acting style of Morte. He mimics the familiar looks of the Professor by adding an artificial beard then wore eyeglasses.

In this video, he shared a timelapse of how he applied the fake beard on his face. He said in the comment section that he used a furry scarf and Elmer’s glue. Then he wore the familiar suit and tie attire of the said character.

Here’s the final output! In this video, he is joined by his friends in a 2-minute parody video of Money Heist. They re-enact and edited themselves in to the remarkable classroom-like scene with the gang of the heist series. Check it out below.

With the help of his advanced talent on photo and video editing skills, Edgar Torres Jr. continuously create funny and cool edits when you browse his Facebook account. Some of his works also went viral in the past few years with his hilarious edited television and movie posters where he add himself as if he’s realistically part of the pictures. His works even caught the attention of Kapuso celebrity actress Maine Mendoza where he edited himself in the vacation photos of the actress.