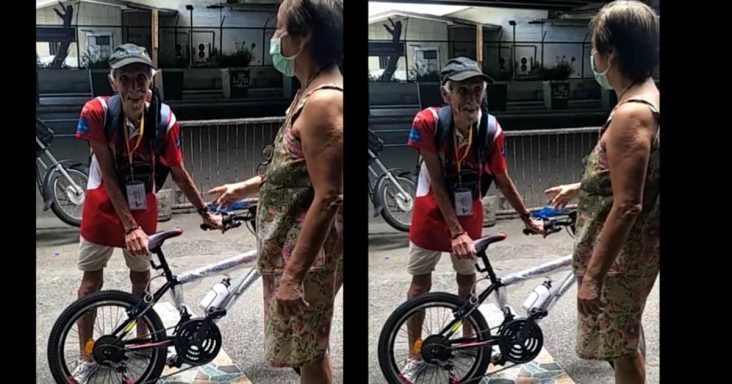 An elderly candy vendor received a mini mountain bike from a bike shop owner as a gift.

The elder was hoping to buy the bike for 2000 pesos, but the bike shop owner returned his payment and got the bike in exchange for his smile instead. The bike owner found that the elderly would travel daily to find out if a bicycle was available since May 15, twice a day.

According to the bike shop’s staff, the elder daily asks if he could buy the bike for 2000 pesos. Then yesterday, the elder asked the bike owner herself and answered him not, at first.

Until this morning, the bike owner once again met the persistent elderly vendor to buy the bike. She changed her mind when she learned about the elder’s desire for the bicycle. So she gave it to the man as a gift instead.

Many netizens’ hearts were touched when they saw this post by CARBS Carandang Motor / Bicycle Parts and immediately went viral. The video has already viewed 3.6 million times with more than 109 thousand shares in just 8 hours, as of this writing. Below is the full caption of the touching Facebook post, in Filipino:

Also Read: Young apple vendor goes viral for not accepting money if fruits are not taken