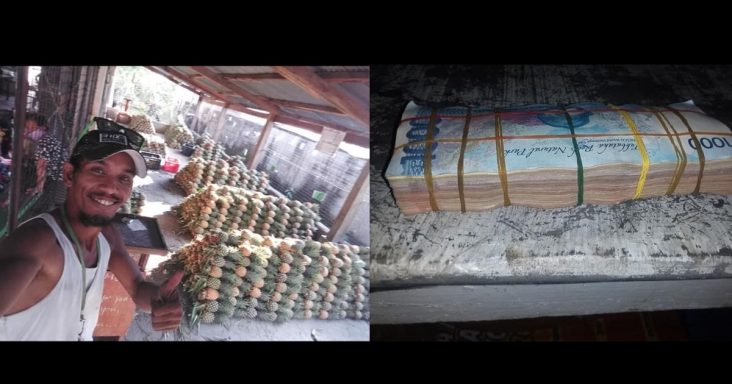 A man from Ormoc shared pictures of his saved money and a glimpse of his business on Facebook, April 16, Thursday.

Reynaldo Pepito shows photos of thick collections of paper money and lots of collected peso coins. Reynaldo said in his viral post to stop blaming the government if you are poor. You’re the one who decides how to run your life. He added if you want to be poor, befriend the poor. If you want to rise in life, listen and do all in an honorable way until you can save. Below is his actual caption:

According to the photos, Reynaldo has a fruit delivery business, especially pineapples and watermelons. He also collects recyclable and reusable scrap materials like used bottles, cartons, soft drink cans for his junk shop. He shows the fruit of his hard work and dedication for his family. Reynaldo’s post inspired many netizens. Most commented their admiration and appreciation to the man. His Facebook post is well-received, which gathers more than 12 thousand reactions, shared more than 16.7 thousand times, with more than 14 thousand comments.

Prior to his viral post, he shared some pictures of his simple living while doing the hard work in his junk shop. He even do Facebook Live while doing his simple business. Moreover, he shared his love for his children. He said he’s doing all the hard work so that they won’t experience the hardship of poverty he was in before. He also said that his capital to pineapple business will go down after the quarantine. But that doesn’t stop him, he’ll fight through the end.

Also Read: This millennial Filipina’s own money challenge will inspire you to save too!