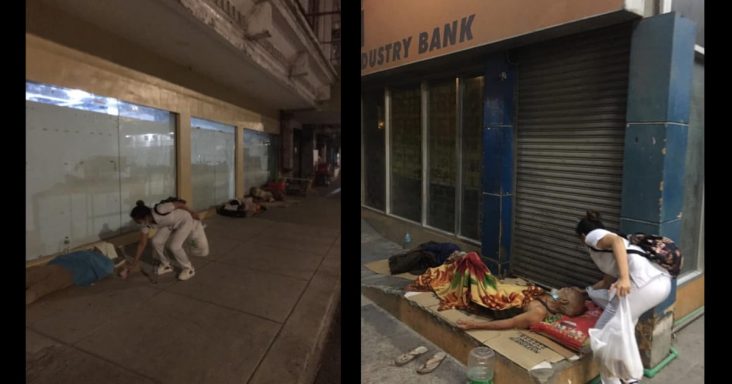 A staff nurse in Davao shared in a Facebook post about the act of kindness about a female colleague nurse did after her duty in the hospital for the homeless people in the streets amid the community lockdown.

Hafiz Marohombsar and a co-health worker were from the 3 PM to 11 PM shift. He said she convinced him to have a walk on their way home because the free shuttle left early and it would take an hour to come back. “She already did several alone and was planning something a good idea,” Hafiz said.

They headed to a 7/11 convenience store. She bought some goods that she will give to homeless people. Hafiz said they would give it to everyone they saw to anyone sleeping on the streets.

They went to the convenience store again and bought additional food. She said she hope the homeless were not dismissed by the officers due to the implementation of enhanced community quarantine. Hafiz offered to pay half of the price, but she was already okay he joined her to this act. She was thankful he was there to help carry the food too, Hafiz said.

They gave goods any less fortunate they saw until she came near to her house.

According to her, it’s her third time walking on her way home. She said she noticed there were sleeping on the streets, which were usually elders. “How are they this time? How do they eat? Does someone even care about them during this crisis?” She asked these questions amid the coronavirus crisis.

The Facebook post is well-received by the netizens, sending God’s grace to the good Samaritan health worker. As of this writing, the inspiring post has 46 thousand reactions, shared 16 thousands times, with more than 3600 positive comments.