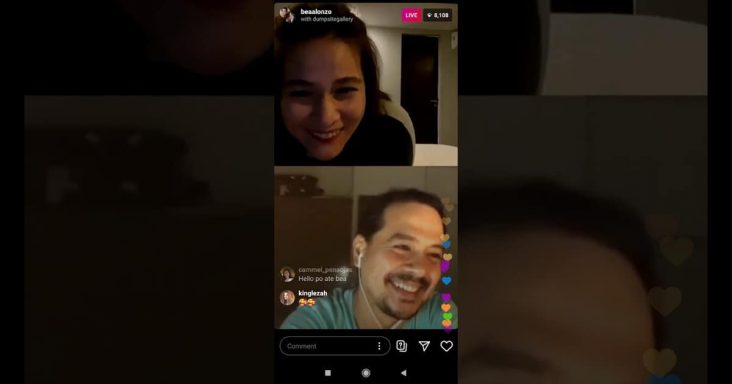 Kapamilya actress Bea Alonzo started an Instagram Live to share her “binagoong rice” recipe. Eventually, when she was randomly looking for someone to join her on IG Live, John Lloyd Cruz surprisingly appeared the screen. Their names and screen names “Popoy” and “Basha” trended on Twitter. Netizens sharing clips of their IG Live, on a late-night of April 27, Monday. The former love team gave “hopia” (Filipino slang for hoping) feels to those who want to see them romantically together, not just in a movie but also in real life.

Bea and John Lloyd had interesting talks from light to serious topics then exchanging some lines from their previous movies. Bea asked John Lloyd some “slambook” type questions to proved she know the actor. In contrary to light talks, John Lloyd shared his opinion and thoughts happening in the country and the world, including his fear for his son to grow in the state of the world today. He also thought that donation drives are unsustainable. The scenario led Bea even to ask him if they’re arguing. But John Lloyd clarified it’s just a discussion. He said two people who already knew each other in more than 18 years can discuss and understand their point even one raising his/her voice. Eventually, John Lloyd shifts the air of the conversation when he started to say some lines from their soap opera, “Kay Tagal Kang Hinintay”.

Later, John Lloyd played guitar as Bea joined him sings “You Are My Sunshine”. Bea said “namiss kita”, and John Lloyd answered with “mamimiss kita”. Their Instagram Live suddenly needs to end when John Lloyd’s son, Elias, entered the room. “Yan ang sunshine ko… Kailangan ko ng patulugin to.” He needs Elias to go to bed. As he bid goodbye, “see you when I see you”. Bea left in the screen frame smiling.

Before John Lloyd joined Bea on Instagram Live, Bea spent her day cooking and preparing “binagoong rice” her team gave for the frontliners of the National Institute of Health in a donation drive “I am HOPE”.