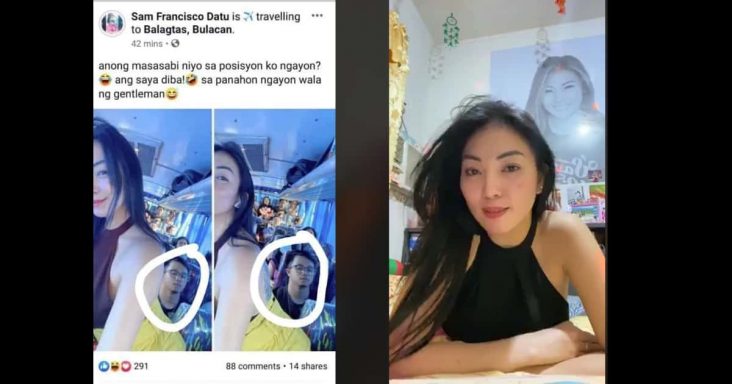 A male commuter posted an apology after his friend informed him that he was in a post by Sam Francisco Datu, the woman he had been with on the same bus. He’s afraid he’s face is encircled and he might get bashed because he didn’t offer his seat.

Demark Maranan explained to the public why he wasn’t able to give his seat to the lady.

“Monday to Saturday I wake up at 4 am to get to work from Pandi Bulacan to Sta. Cruz Manila. My wife and I are lucky we came home at 8:30 pm. If not, it will take 9 pm to 10 pm when traffic is over. Even I work in an office, it’s still tiring and sleepy on a daily commute. Sometimes I can’t even go to work on Saturday because of tiredness.”
“We have a house in Valenzuela but I prefer to go home to Bulacan even though I am tired only to see my daughter even she is asleep.”

“To Ms. Sam Francisco, I’m sorry if I wasn’t able to offer my sit to you, I was tired and lack of sleep. I am not angry or resentful If I get bashed by those who know you. I know the people around me what kind of person I am. Godbless!”

She said she doesn’t refer to Denmark in her controversial Facebook post. She said that she didn’t add emoji to her first post then she reposted another with emoji in fear of possible issues. Suddenly, when there are lots of reactions, she deleted the post. She said she’s not complaining, it’s just her nature to post jokes for some of her followers. She said she already apologized to Denmark through personal chat She is hurt because she and her family received hate messages.

Also Read: This netizen can’t stop himself not to share his kilig to a flight attendant