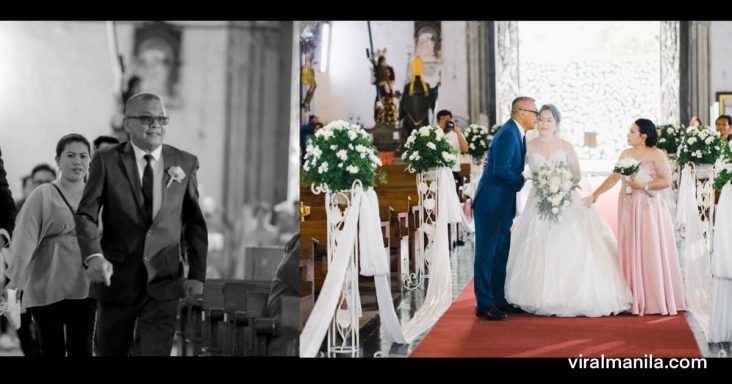 Jamel Ara Pasilan of NQ Modern Photo was assigned to capture the top shot for Hermo and Tin Wedding in San Agustin Church. “It’s a normal bride-walking-down-the-aisle-moment, the groom was crying and there were happy tears everywhere, when suddenly Tin, our bride stop in the middle of the aisle,” he started his post.

Until the churchman curiously asked him “why the bride standing in the middle so long, what’s going on?” It was the first time to happen in the San Agustin Church, which is very strict at the time.

Jamel saw that the bride’s Daddy does not have her place. The bride doesn’t seem to want to go without her daddy, he thought. Five minutes have passed, the bride is still standing in the middle of the aisle.

He said some church people and some of the coordinators making a sign for her to go on a walk, but the bride stood still.
“I’ll wait for Dad”, she said.

Ten minutes have passed, but people still can’t tell exactly where the Daddy is. They are trying to call but based on the appearance of their family there are no concrete answers. Around 15 minutes passed. “What if Daddy doesn’t reach? What happened to him? We saw him leave the parking lot before leaving the hotel. Where has Daddy been?”, he asked himself.

“More than 15 minutes Daddy suddenly came in. And the crowd was clapping and cheering, and everyone was so happy, and I cried. We’ve been shooting weddings for almost 10 years and now, it sinks in really hard … it all goes down to that one special thing, FAMILY.”, Jamel shared.

They find out that the Daddy was not allowed to park in San Agustin for some reason, so he went back to Manila Hotel to park his car. He had just finished a Taxi, and when he felt like he couldn’t reach it, he just stopped and suddenly rode to any motorcycle rider he saw. The owner of the motorcycle was angry at first. “I’m sorry but my daughter is getting married, I have to come,” the Daddy revealed. He might be thinking his little girl is waiting for him. And yes, she is waiting for Daddy in the middle of the aisle.