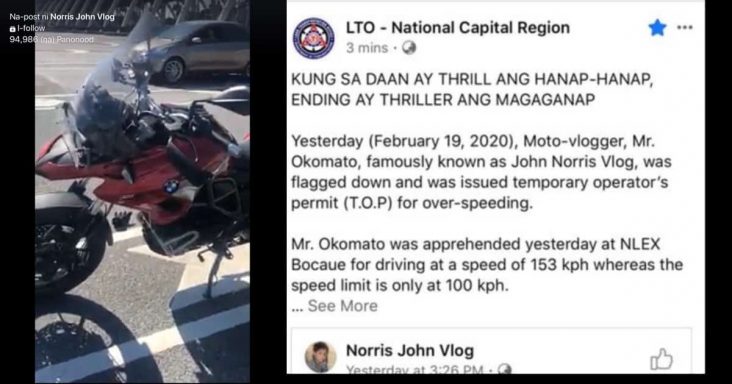 A Moto-vlogger, Mr. Okomato, popularly known as John Norris Vlog, was apprehended by the LTO-National Capital Region for over speeding at NLEX on February 19, 2020.

Mr. Okomato was caught for driving at the speed of 153 kph, beyond the 100 kph limit. The arrested Moto-vlogger reshared the video posted by the LTO as the officials inspect his BMW 700cc motorcycle.

“It is alarming that in Mr. Okomato’s vlogs he is driving his motorcycle way beyond the limit. The Land Transportation Office will not tolerate such behavior on the street regardless of personality. Everyone who holds a driver’s license is required to follow the rules and regulations”, the government enforcement agency reminds the public on their Facebook post.

TV Host for CNN Philippines, transport blogger, and road safety advocate – James Deakin applauded the government organization for implementing the law and not taken advantage by the motorist’s public personality.

“Good job, LTO – National Capital Region. We’ve lost way too many people on our roads due to reckless driving to allow people to boast about their violations and glamorize it on social media. It’s a slap on the face of the families who have lost loved ones to lawless drivers. Be responsible. We all have to share the road. You wanna race? Go to the track like a real pro.” Mr.Deakin reminded.

LTO ends their post, “We remind everyone that having a driver’s license is not a right but rather a privilege. We have the mandate to revoke a license if we deem the owner to be abusive or violates traffic laws”.

Below are the details for over speeding violations:

RA 4136 Chapter IV Section 35 states that (a) Any person driving a motor vehicle on a highway shall drive the same at a careful and prudent speed, not greater nor less than is reasonable and proper, having due regard for the traffic, the width of the highway, and of any other condition then and there existing; and no person shall drive any motor vehicle upon a highway at such a speed as to endanger the life, limb and property of any person, nor at a speed greater than will permit him to bring the vehicle to a stop within the assured clear distance ahead.