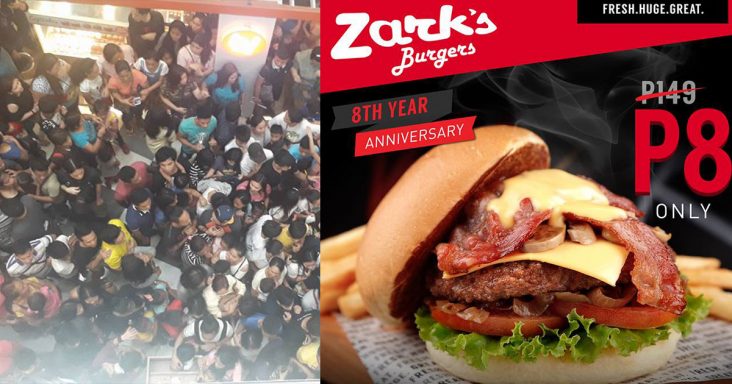 Thousands went early this morning to malls in hope to avail an 8-peso burger deal.

The popular local burger chain, Zark’s Burgers celebrates its 8th year anniversary by giving away 95% discount of their Ultimate Burger, which cost regularly for 149 pesos, for first 80 customers only today. The promo caused pandemonium to the malls where their branches are located. Happened on a National Heroes Day, the public holiday adds as a reason for the huge number of spectators.

Netizens posted pictures and videos of the wild crowd wanted to come inside the burger store. The word “Zarks” even trended on Twitter this Monday morning. One viral FB video is an above view captured by Pauline Cabal Estrada in SM San Mateo. The scary scenario was even compared to a zombie invasion in Train to Busan movie scene.

There’s even a long queue outside the mall.

So what’s this burger that these people craving to avail? The Zark’s Ultimate Burger is a mouth-watering “1/4 pound burger with cheese sauce in a bed of fresh veggies and topped with sauteed mushroom and bacon”.

On their Facebook page, Zark’s Burgers apologized for the “inconvenience experienced by the patrons and mall shoppers”. The burger chain is grateful for the “mammoth response” showed in the celebration of their 8th year anniversary.

Did you avail the 8-peso burger promo? Are you one of the crowd? Share your experience in the comments.