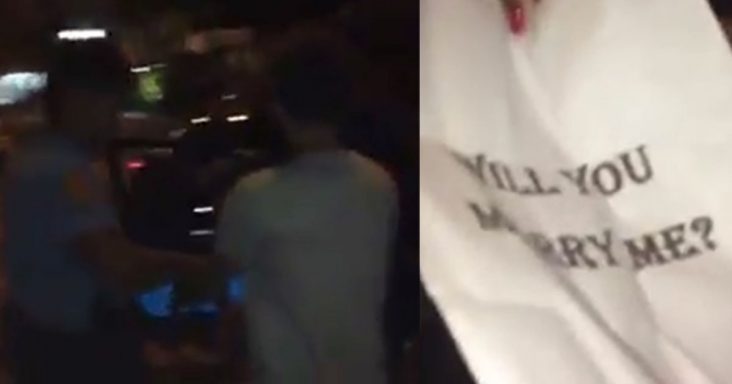 A wedding proposal video has gone viral today with some help from our policemen.

Christopher Agripa Engay along with their school batchmate Ronnie Beñosa Candelaria, a policeman, helped their friend Jorick Jugado to set up a wedding proposal to his girlfriend Jasmine Ferreras.

The video started intense when Ronnie arrests Jorick, inviting him to the police mobile. The prank looks more real when they asked for the warrant of the arrest paper. Worried Jasmine asked them in what station they will be heading. After that, the hand capped Jorick was asked to kneel in front of his girlfriend. There’s a brief altercation made the prank looks more convincing. Jasmine can’t help herself scarily shouted that it was an illegal act.

Until the policeman released the paper and gave it to Jasmine.

When she opened the folded paper, surprised Jasmine found herself speechless, quickly read the romantic “Will you marry me?” question.

Jorick was all smiles and the crowd around them went wild. He then formally asked the wedding proposal when he showed the wedding ring to her.

All their efforts didn’t come to naught when she gave her precious “yes”!

Watch the video below:

The viral video has already got 1.35M views and shared close to 21 thousand times as of this writing.

Recommended: #Crush: This Jollibee Ad for Valentine Reminds Us Not to Give Up on Love