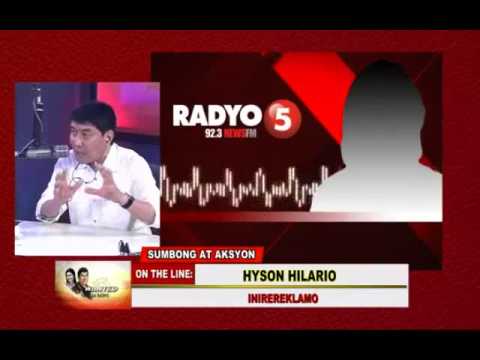 A photographer named Hyson Hilario is reported taken advantage a model during a photo shoot.

Maris, not her real name, agreed to an exchange deal with the said photographer who she first met on Facebook. She agreed to a photo shoot with an aim to get free online exposure and Hilario will add her to his portfolio.

She insisted first that she wanted someone to be with her during the shoot but Hilario declined. She doubted first, even there are no other people involved like a make-up artist, stylish etc., but her past photo shoot experience gave her the courage to pursue Hilario’s offer. Moreover, she reasoned out that she trusted him because he’s famous on Facebook and already shoot lots of models.

But the photo shoot turned out to be a nightmare for Maris. She revealed that Hyson Hilario maliciously touched her breasts and her genital.

The complaint will be filed on NBI with the help of Raffy Tulfo In Action in Radyo Singko: