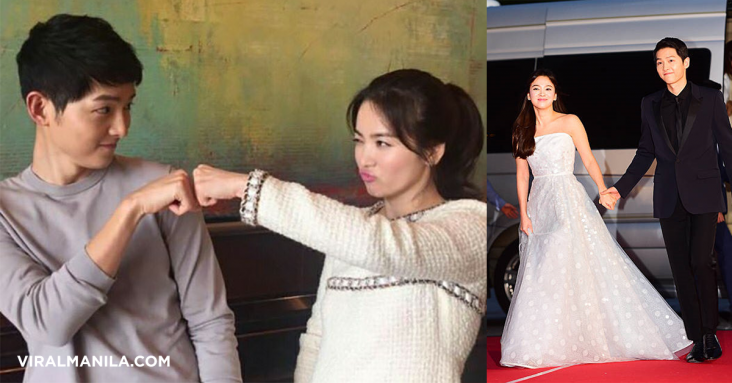 Yes! The SongSong couple is getting married, for real!

Song Joong Ki and Song Hye Kyo, stars of popular Korean drama series – Descendants of the Sun, will tie the knot this October 31, 2017.

The exciting news is announced by their respective agencies, Blossom Entertainment and United Artists Agency (UAA) via soompi.

“Hello. This is Blossom Entertainment and UAA.

“First of all, we give our thanks to the Korean and international fans who have shown a lot of interest in and love for Song Joong Ki and Song Hye Kyo. Also, we ask for your understanding as we convey this surprising news.

“Song Joong Ki and Song Hye Kyo will be holding a wedding ceremony on the final day of October 2017. A marriage is not only a private matter but also a meeting between two families, so it was a delicate situation in many ways.

“There was no choice but to be cautious prior to marriage, and so we are at last conveying this message. We ask for everyone’s understanding.

“We ask for you to send the couple best wishes for their beautiful future together, and the two actors will be conveying the news to their fans separately. Thank you.”

After the announcement, the fans and shippers of 2016 South Korean hit drama series couple celebrated their excitement and happiness about the good news, making the #SongSongCouple hashtag trended on Twitter.

Below are some of the reactions of the netizens:

they’re getting married!!!! i signed up for this, yes! #SongSongCouple pic.twitter.com/gJmOkfFGSc

Kwang Soo be like: I knew it from the very start #SongSongCouple pic.twitter.com/44PZkBkMSA

Following their wedding announcement, Song Joong Ki and Song Hye Kyo wrote their sincere message to their fans, via soompi.

“I recently had the honor of participating in a production that could let me shine. It was such an amazing experience to me because I received so much undeserved love. During that time, I made a precious friend who eventually became my lover.

“In the beginning of 2017, the two of us promised to spend our lives together. In order to begin a new life where we can get through difficult times together, Song Hye Kyo and I have decided to get married on the last day of October.

“I think a lot of my loving fans would’ve been taken aback by the sudden news. I wanted to tell everyone earlier, but I had to be cautious because it was a decision that involved two people and their respective families. I also didn’t want to cause any trouble to the people involved in my upcoming film. I hope you will understand.

“I promise to live my life as a great actor and a reliable head of my family. I hope you will continue to support our relationship. Thank you.”

In her own letter, Song Hye Kyo tells her joy working with Joong Ki. She asks for the blessings of her fans:

“I think many of you would’ve been surprised by the sudden news. It may appear as if I lacked consideration for my fans, but I hope you will understand [my intentions]. At first, Joong Ki was a colleague who clicked well with me. As we worked on a production together, we discovered that we had similar values and we could really talk about anything. Because he was a good friend and colleague, we continued to keep in touch even after the [drama] ended. Over time, the faith and trust that Joong Ki had shown me helped me imagine a future with him. I was thankful that he had such genuine feelings for me, and I was also able to confirm my own feelings for him. I wanted to relay the engagement news to my fans, but I had to be careful because it wasn’t only my decision. I feel nervous announcing the news all of a sudden, but I trust that my fans will support me. Please continue to love me like you have until now. I want to thank my fans for waiting and believing in me. The two of us will live happily. Please give us your blessings! Thank you.”

Share your wedding message to the #SongSongCouple in the comments!

Recommended: #Crush: This Jollibee Ad for Valentine Reminds Us Not to Give Up on Love